True to form, I almost missed very first flight after moving to NYC. I swear it wasn’t my fault, my Uber driver was extremely rude and dropped me off at the wrong terminal! As I’m sprinting through the terminal, I get a text from my co-worker telling me he’s switched flight to be on my flight.

I’m the last one on the plane and, of course, I’m sitting next to my co-worker. Awkward small talk ensued when I really just wanted to sleep.

We separated after the airport because he needed to pick up his luggage and we weren’t staying at the same hotel. I had reserved an Airbnb and this cute little guy was there to greet me! 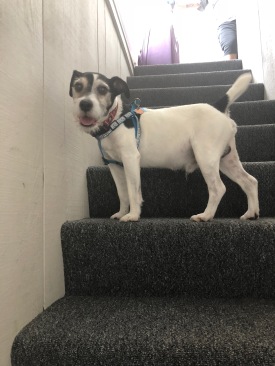 Can you guess the name of this dog? Answer at the bottom!

The first morning I took myself to breakfast at the restaurant Jenny worked in in Forrest Gump! Food was great and it was fun to chat with the waitresses about things to do around town.

My company sponsored a mid-day cruise with full brunch and libations on a beautiful paddle-wheel boat cruising the Savannah river. The boat was huge! Three stories with two dining rooms and a bar on the top deck.  There was fried chicken, honey glazed spiral ham, shrimp and grits, ham and broccoli quiche, garden greens and desserts. The captain entertained and enlightened with a narration of the landmarks along the way. 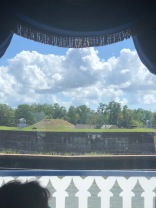 Did you know that Savannah does not have an open container law? People were milling about with mojitos and beers and there was a jazz festival too! I was on my best behavior, however and ordered food to my room instead of going out to party.

I have never been too cool for corny tourist tours so I jumped at the chance to take a Segway Tour. I’ll admit, I was nervous at first and got scolded for riding too close to a buddy but when I finally got the hang out it, I couldn’t help but race around. The Segway was a great way to tour all of the squares in Savannah. Each square had it’s own special feature: a statue, water fountain or gazebo!

We also saw a lot of haunted buildings – turns out there were a lot of crazy murder stories in Savannah! 😱

The prohibition museum was really interesting. I learned more about the history of the laws and the mob too! The most interesting fact was that beer and liquor companies started producing other goods to sell. 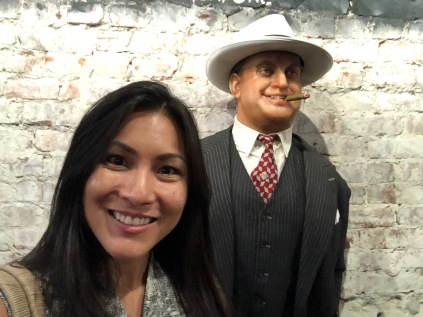 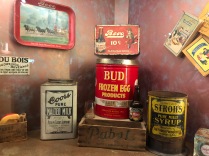 I had a special opportunity to listen to Will Bowen speak about complaining and how it affects our outlook on life and the people around us.

A complaint is more than a statement of fact—it is a complaint when you want something changed but are not talking to the person who can change it! If you are focusing on the problem without offering a solution, you are complaining.

Why do we complain?

What can you do?

When your mouth stops expressing negative thoughts, your mind will find other, happier thoughts to create.

This was my first conference that I have attended for my company and I thought my days were going to be packed so I didn’t bring any workout gear. What a mistake! I only needed to be in conference hall during networking breaks and I spent the rest of the time wandering around the town trying to take yoga pictures (huge fail) or talking to vendors.

For dinner we went to The Olde Pink House and it may have had the best banquet dining service I’ve ever experienced. This is important because I spent my early 20’s planning and serving banquet halls.

The food was amazing and I ordered the whole fish. The man sitting next to me was appalled by how much of it I was able to eat – so I ate a little more.

Between the dinner and the dirty martinis, it was a fantastic way to end my trip in Savannah.

My Uber driver told me that I was really going to like the Savannah airport and he was right. The airport was clean and charming and most importantly, no security line! I can’t wait to go back to Savannah.

Travelling the world, one yoga pose selfie at a time. View more posts